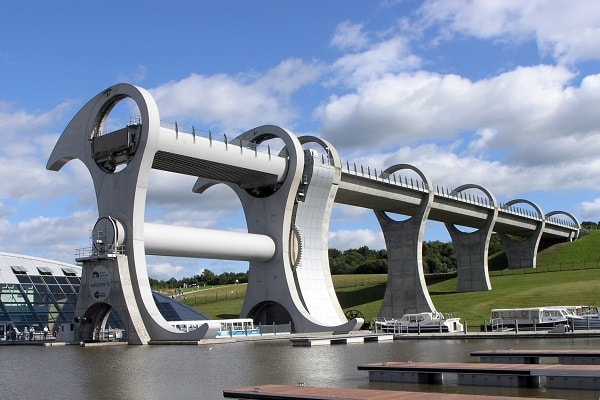 As the Falkirk Wheel approaches its 10th anniversary, its owners couldn't be more delighted in how the one-of-a-kind boat lift has transformed Scotland's once-forgotten and neglected canal system into a thriving recreational and tourist attraction. The 35-m-high, 1,500-tonne structure, internationally recognized as an engineering marvel, reconnects the Forth & Clyde Canal and the Union Canal, a vertical drop of 18 m, and provides water transport between Edinburgh and Glasgow. Conceived in the 1990s as part of the United Kingdom's Millennium Project, its owners, British Waterways Scotland, were seeking a novel, landmark design to take an Industrial Revolution-era project into the new century. The two canals had been connected through a series of 11 locks that were taken out of service in the 1930s when overland transport by road and rail supplanted the canal system. The canals were closed altogether in the 1960s. The Falkirk Wheel, a rotating lift operating through what BWS Business Development Manager Richard Millar calls a "simple and elegant design," move two gondolas on opposite arms from one level to the other. Each gondola, or caisson, contains at least 250,000 L of water and can carry up to eight boats at a time.